Painting with Joe Semprini featuring two of his artworks 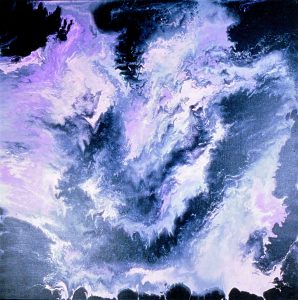 Hi, Joe Semprini, from Semprini artworks, I have a couple of paintings here today that I’d like to show you and just describe some of the techniques I used.

The black one in purple behind me is made with watercolors and latex on canvas. It was originally done for Prince, the musician, while I was living in Beverly Hills. I had met him in a nightclub, and he wanted an art piece but we never hooked up after that so I still have it in my house.

The one on the opposite side is a painting on glass. 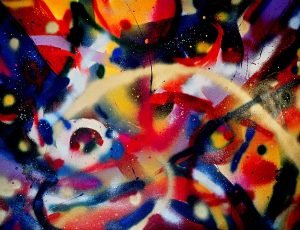 You paint the backside of the glass. It has various acrylics, latex, oil-based paints, and spray paints. You get a 3-D effect because you paint the background last, and the foreground first. You use different colors that are iridescent, so when you move right to left, the colors change. In this way, you achieve a really nice dimensional effect using a various assortment of paints and mediums. I have created a whole series using this method.

When I created the black and purple painting for Prince I was living in Shirley Temple’s old home in Beverly Hills. 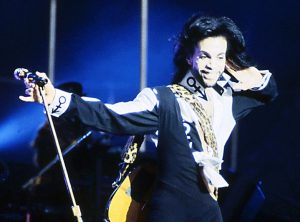 I had a nice outdoor studio it was all sunlight and beautiful scenery and it was exhilarating to be outside doing artworks and I had the space set up for that. It was funny, a lot of TV stars hung out. One night I woke up in the middle of the night and George Hamilton was sitting in the living room talking to my roommate. His car had broken down and George Hamilton’s limo picked them up and drove them home and they came in for a drink.

So it was a very interesting place. Charlton Heston, Sid Caesar, Diane Carroll, and Frank Sinatra all lived on the same street, and Jon Voight used to jog to the driveway every morning on his daily routine. So it was very exciting and exhilarating to have that type of atmosphere. Joan Collins that played on Dynasty was my next-door neighbor so and she has one of my artworks, a Little Star Black Belgian Marble. It was a great place to sell my art and meet a lot of interesting people.